I can’t believe that I forgot to blog this. Its been like a week since Z’s birthday on 31st July last week. Hahaha. BUT don’t judge. I already posted it on Instagram. 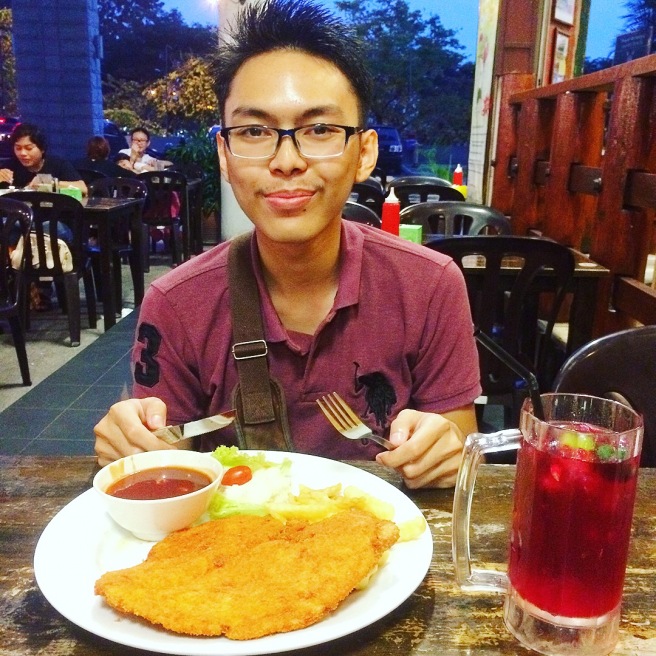 This was the only thing that I could do for him (cash problem, guys. HAHA). A simple birthday treat at Mr Steakhouse Shah Alam, our favourite places during our meat cravings strikes. Reasonable yet affordable prices with tonnes of food selections! The one he’s eating in this photo is Chicken Merryland and we’re actually don’t know what the hell is it. A chicken playing merry goes around? Turned out its just a normal special fried chicken meat with veggies and liquidy tomato sauce. It was pretty tasty tho.

The only thing that I couldn’t believe is that we’re being together for like 5 years. Without him, my life would changed 360° like seriously. There were too many ‘first time’ things that he helped me to experience and if I could make the book of firsts, I would. Haha. Our lives are too different that he literally took me inside his world to blend in. Fyi, I have social anxiety like 24/7 non-stop and he helps me to go through with it. I’m such a freak but he can handle it.

Thanks for taking me to play my very first bowling game.

Thanks for taking me to enjoy my very first steamboat food.

Thanks for taking me to places I’ve never been.

Thanks for sending me to class everyday.

Thanks for sending me food at night when I get crazy.

Thanks for my very first takoyaki treat.

Thanks for helping me buying makeups.

Thanks for helping me with my driving license.

Thanks for hold on to me when the time of the month. HAHA.

There’s too many to mention. TMTM. All the good deeds that I would never ever forget and I’m hoping that we can proceed to the next step when you finished your study. I’m waitin’ for you. Hehe.

Happy 23rd Birthday to the curry of my rice, the sugar of my donuts, the gravy of my potatoes and that’s all I can think of. What’s with the food memes? Bcs I love you as much as I love food 😂

I think I need to keep this blog updated frequently isn’t it? From now on, I’ll be posting daily instead of writing about interesting things ONLY. Haha. Time flies so fast. Need to catch ’em up!

So a week ago, me and Z went to Melaka just to take a space out from the city. Since we’re never took a vacation together so we thought why not? Melaka is not so far from here so we ‘gambled’ and everything was unplanned. Just packed out our things on the night before and the next day, we’re good to go! Some things is much more simpler if we left it unplanned. There you go. Quote of the day. HAHA.

Fyi, we already went to Melaka in the diploma days but its like 3 years ago and I must say, during that time, we’re just like a bunch of teenagers who doesn’t appreciated enough the moments of travel. And now that we’re 23, after all the degree’s torturing, we really need this. The one and only thing that we missed is the beach. 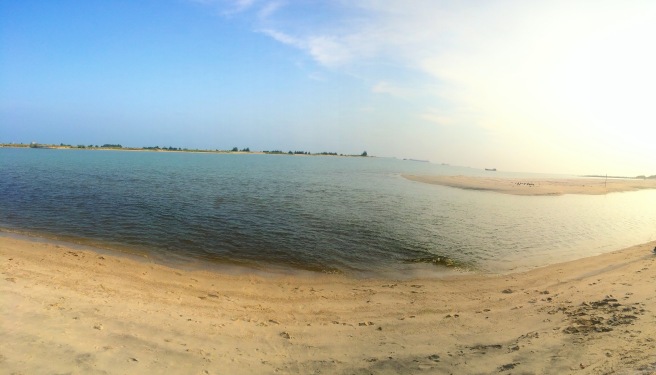 Although it seems that the ocean doesn’t looks like Maldives (the only universal comparison I can think of. HAHA), but the scenery was great. The first step-to-sand touchdown was the greatest feeling. I can sucked the nature spirit under my feet! Exaggerate! Haha. Another thing that is interesting is that on the opposite of the beach, across the road is the line up of food stalls and the bustel which is a hotel-bus hybrid. Haha. Pretty awesome, right? They also even have a bustoilet that looks like a home toilet. OMG. Just give them a medal please for the convenience. 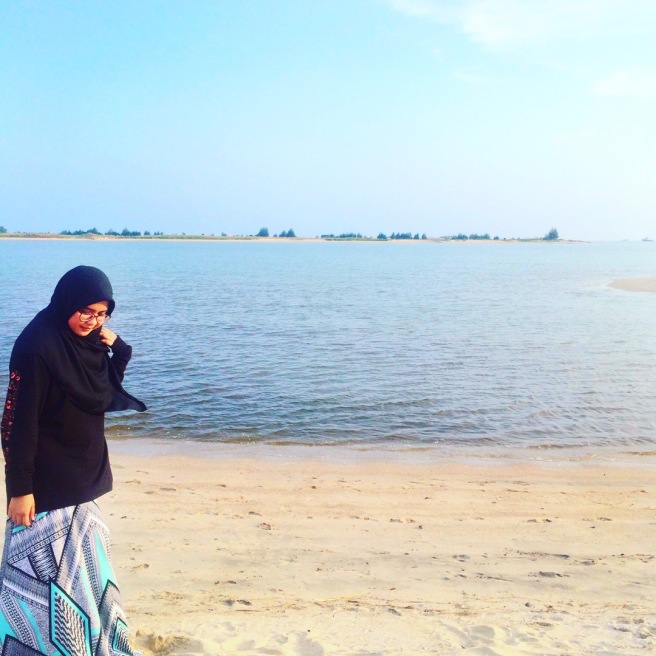 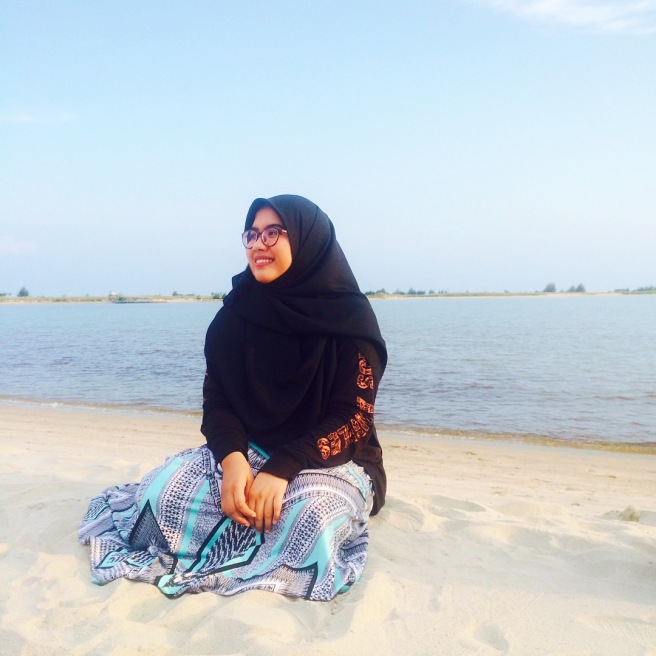 Just look like the sand. Never had a thought that it will ruined my skirt. Hahaha. We’re really enjoying our moments here. Couldn’t imagine that we had this one time here a few years back and it was a haze. Just because we didn’t have other time to lounger at the beach, we decided to ‘wear’ an invisible mask just to pretend that the air was not polluted. Haha. Good ‘ol days.

The next day, we went to our favourite barber shop by Auntie Molly. Had a haircut at only RM12, guys. Tell me where I can find this price in Shah Alam? Its a rhetorical question and the answer is no. Hahaha. Again for the unexpected day, we decided to go to Port Dickson just to look around. I went there a few times before but never had a chance to walk around the beach so the time has come. 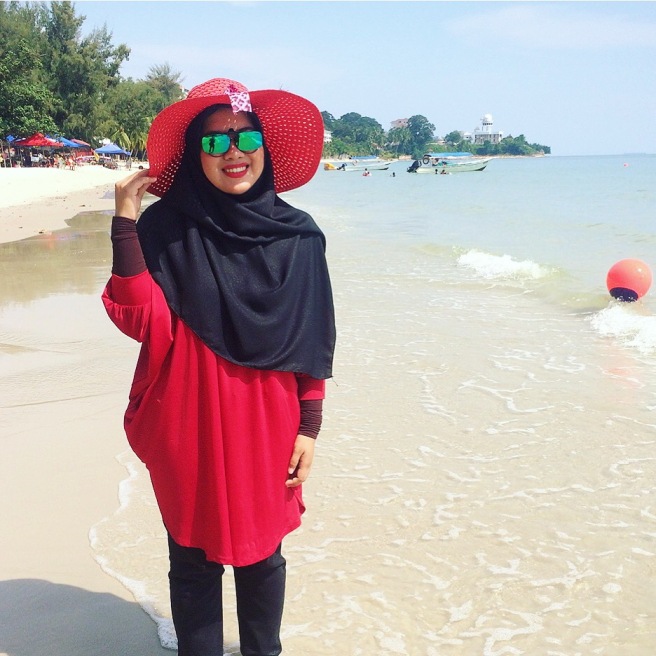 I don’t know why I bought that red hat (maybe I can’t stand the idea that the colour matches my clothes theme?) Hahaha. It was pretty hot tho so the purchase was worth it. Here in Port Dickson beach, its a lil bit crowded. Looks like this place never give up to attract tourists and travelers. One thing that I love is that the ocean is literally blue and looks clean! I cannot resist myself to went into the water and don’t care if my pants is wet. Hahaha. 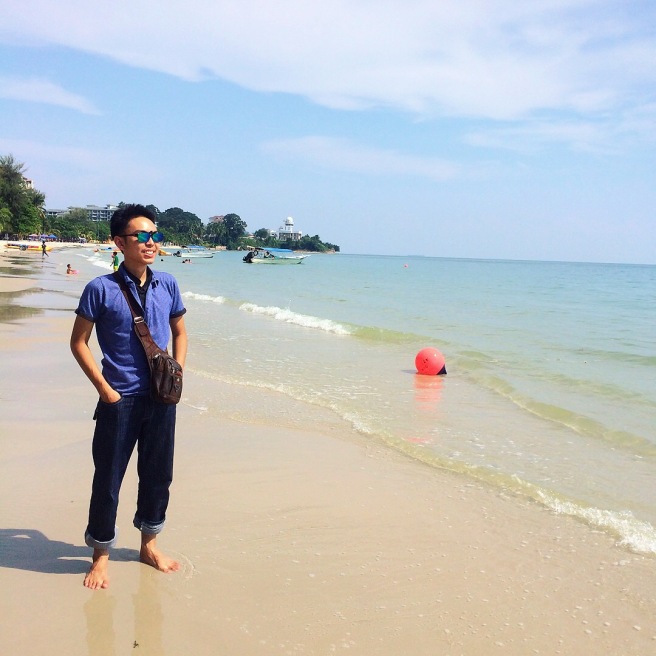 We were really had a great time. Although we’re not buying anything like literally nothing (forgot the hat), this put me in a situation that just go travel if you want although if you’re low in cash because the moments is treasure. Fyi, we were just spent for the gas and food. That’s all. Hahaha.

Thanks for dropping by ❤ 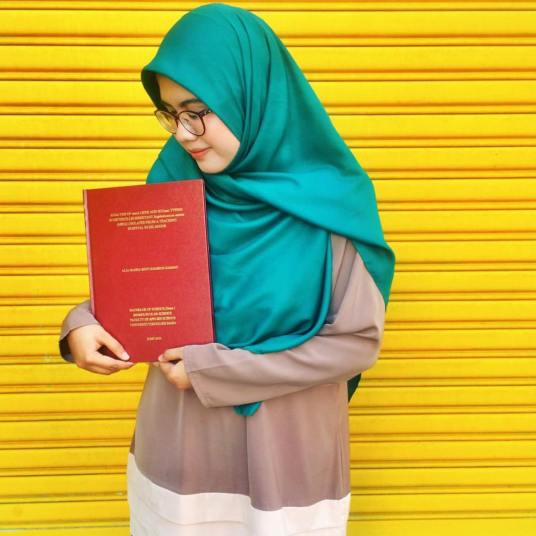 A great pleasure feeling of freedom and now, I know how it feels like. Alhamdulillah. In the long run, I’ve managed to complete my Final Year Project (FYP) and my very own thesis. Basically, I’m a half way in getting my degree and by that I mean degree in Biomolecular Science in case you’re new here. Alhamdulillah again!

Frankly speaking, it was not easy. I cried like literally in every semester for different reasons. I’m extremely exhausted, the mistakes that I’ve made and the pressure that was way beyond my control. All in all, it was hell. Hahaha. It took almost a year for me to get the thesis done and the strain get more intense especially a month before the presentation. The only thing that I could describe is that NOTHING you should be terrified about unless you’re not prepared. Get it? Ah. Lemme give you a little heads up on how you should handle/manage your FYP thingy :

That shall do it. Basically, it is all ordinary stuff that you already know. Common sense. Just in case if you have any questions, send me an email. I’ll reply it ASAP. I’m unofficially graduated until the result announcement. Right now, I can finally blogging in peace without any interruption. I would like to proceed with my products’ reviews because you know it’s my jam. Hahaha. I’d bought tonnes of products especially makeup and I really want to share with my precious readers about them. Wait for it. 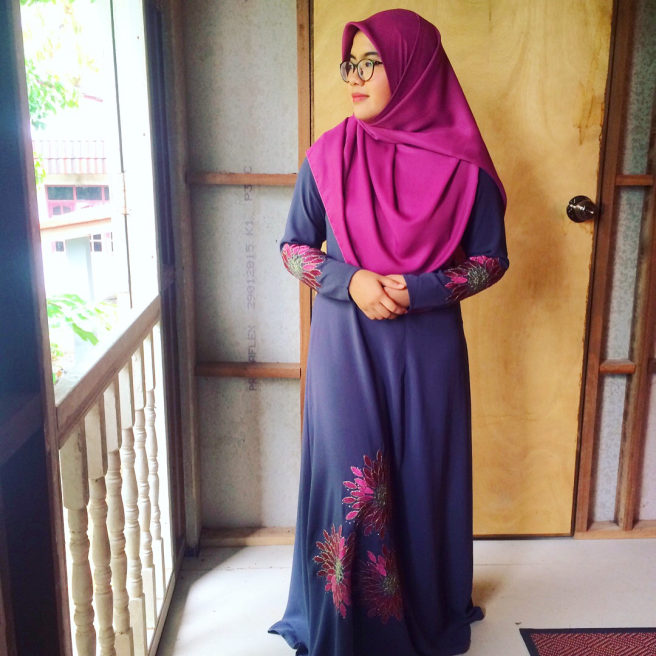 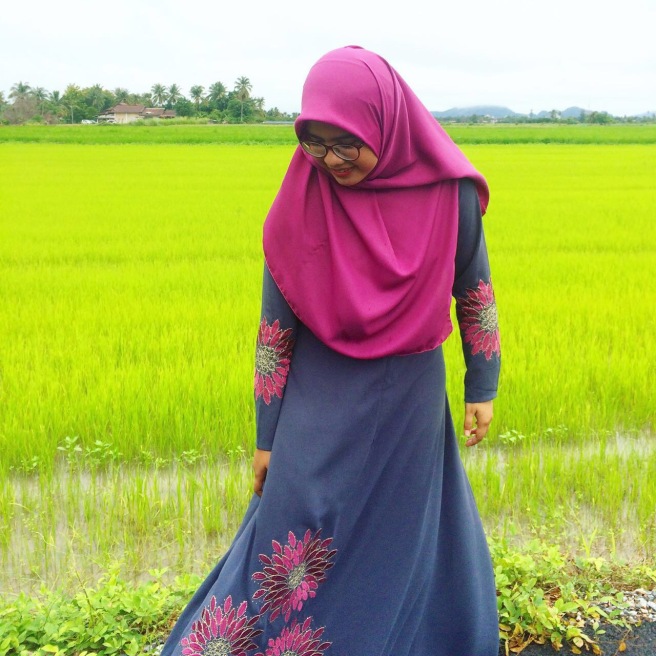 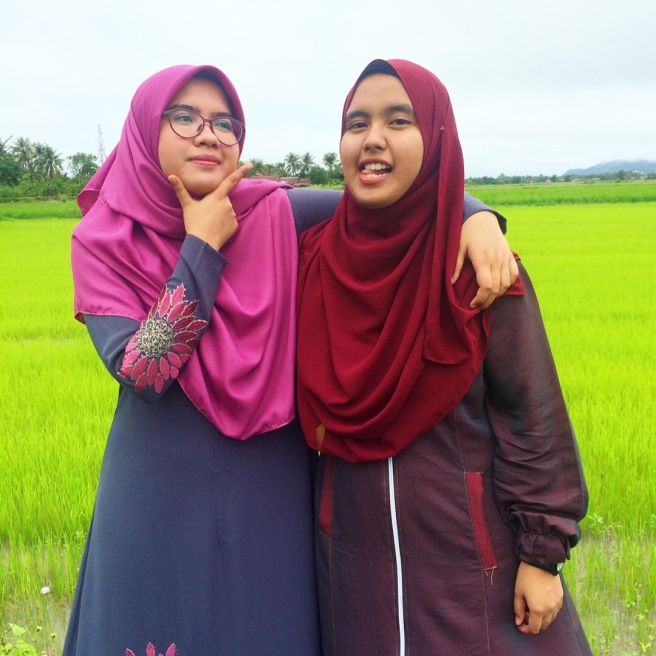 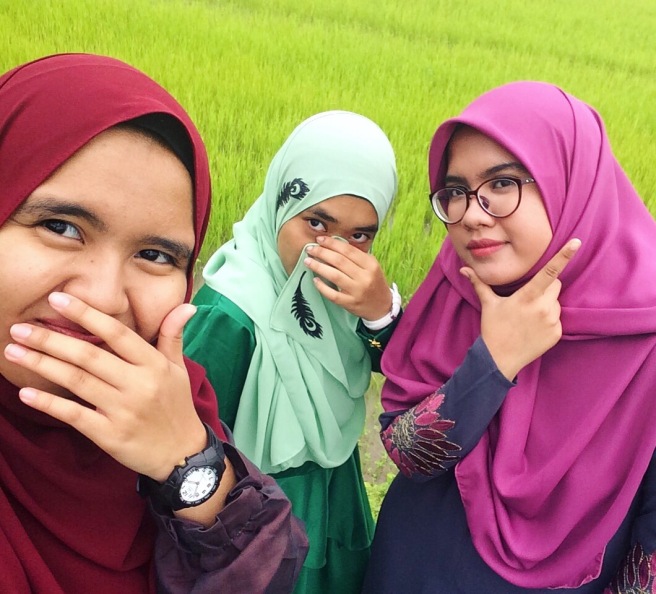 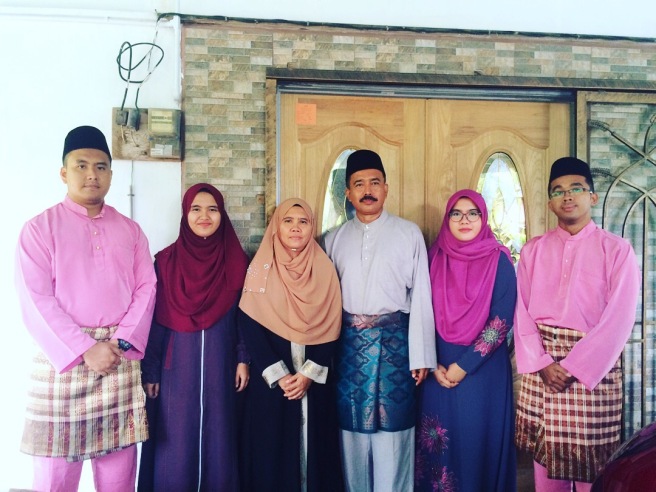 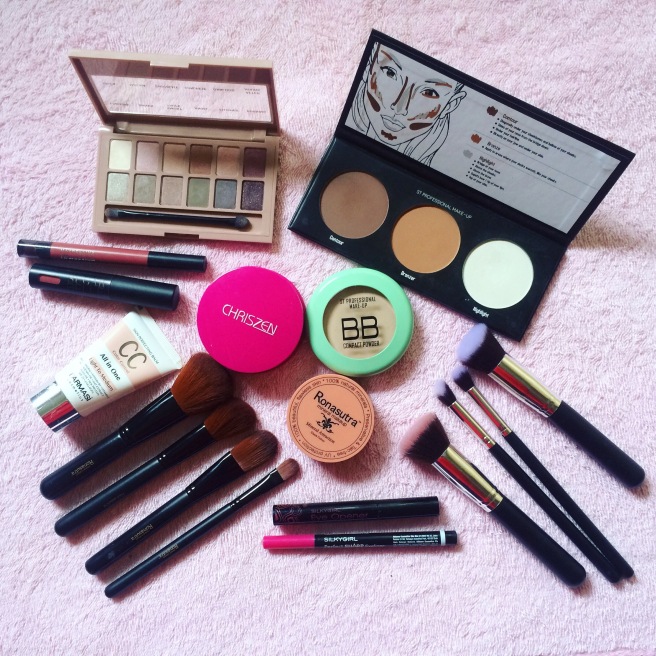 I am so in the mood of writing right now because of the biggest burden has been removed from my shoulder; the FYP presentation. Alhamdulillah. Yesterday was a historical day for me. I managed to get it over with. For us the final year student, the only thing that we can think of in this last semester is this. Its all about this presentation AND it is not an ordinary one BUT it is kinda torturing. You’ll never know how your project will turns out. Positive results or negative results? You need to juggle your time management wisely. 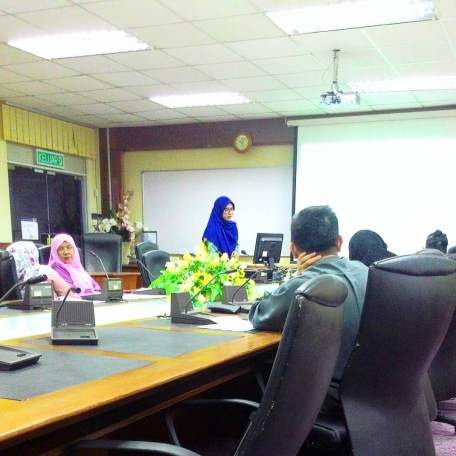 Facing six panels out of seven was a toughie. Seriously, I was nervous and not very well-prepared. Four hours of sleep was not enough guys. More unlikely, I’m the 4th presenter. Hahaha. There’s one thing I flabbergasted about was that I’m not shaking! Normally, I was nervous as hell and it can be seen on my hands obviously. Alhamdulillah for that. I think, I’m more into presentations now. Getting used to it. It is a good thing tho.

I was lucky this time. Dr Maslinda who is the senior lecturer for our program always asks lots of questions or giving opinions on like everything that makes her curious. Honestly, since she taught us on the third semester, we’re kinda terrified of her. Hahaha. BUT lucky me, I’m the only student that she didn’t asked and it was a miracle. Haha. Who would had thought of that? I managed to ‘escape’ from her! 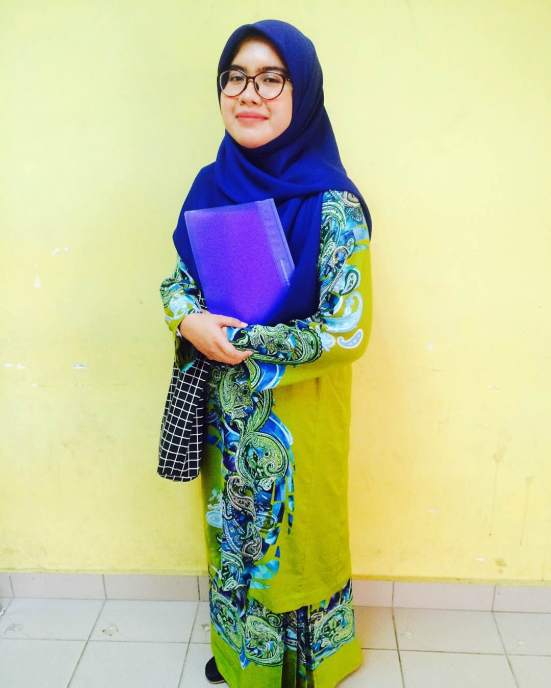 Actually, I didn’t put too much effort on my FYP (juniors, pls don’t try this at home. Haha). I know, I know. In the beginning of the semester, there’s nothing that encouraged me at that time because I feel exhausted of my previous FYP proposal writing. It was chaos. I spent a lot of time on that and I want to rest, take a chill pill. Haha.

Alhamdulillah. I can’t believe its almost over. ❤

P/S : If you want me to do a special post for the tips on this FYP stuff, leave a comment down below or send me an email.

Next week is gonna be the climax of my final semester when on this 16th will be held the Final Year Project (FYP) presentation. I’m looking forward to this, also a lil bit freak out. Hahaha. I cannot wait for this to end. This FYP is all about your degree from the start until today compiled together including your tears, emotions roller coaster, mental tortures and everything! Sounds a lil bit extreme, huh? Hahaha.

Last week was the final week for the lab work and now we just focusing on the presentation and the thesis. I could’t imagine how my brain and body can cope with this since its just not about the FYP but also we have classes, tests, lab reports and assignments to submit. It is hardcore, guys. So yesterday, we were having a lab cleaning session handle by one of the lab assistant, Kak Nurul.

It almost come to the end, my degree (although I don’t care about my grades anymore. Hahaha) Of course I want to pass and get the scroll. Can’t wait for the moment. I learned a lot here.

Now, I can keep my lab coat in the basement. Haha. 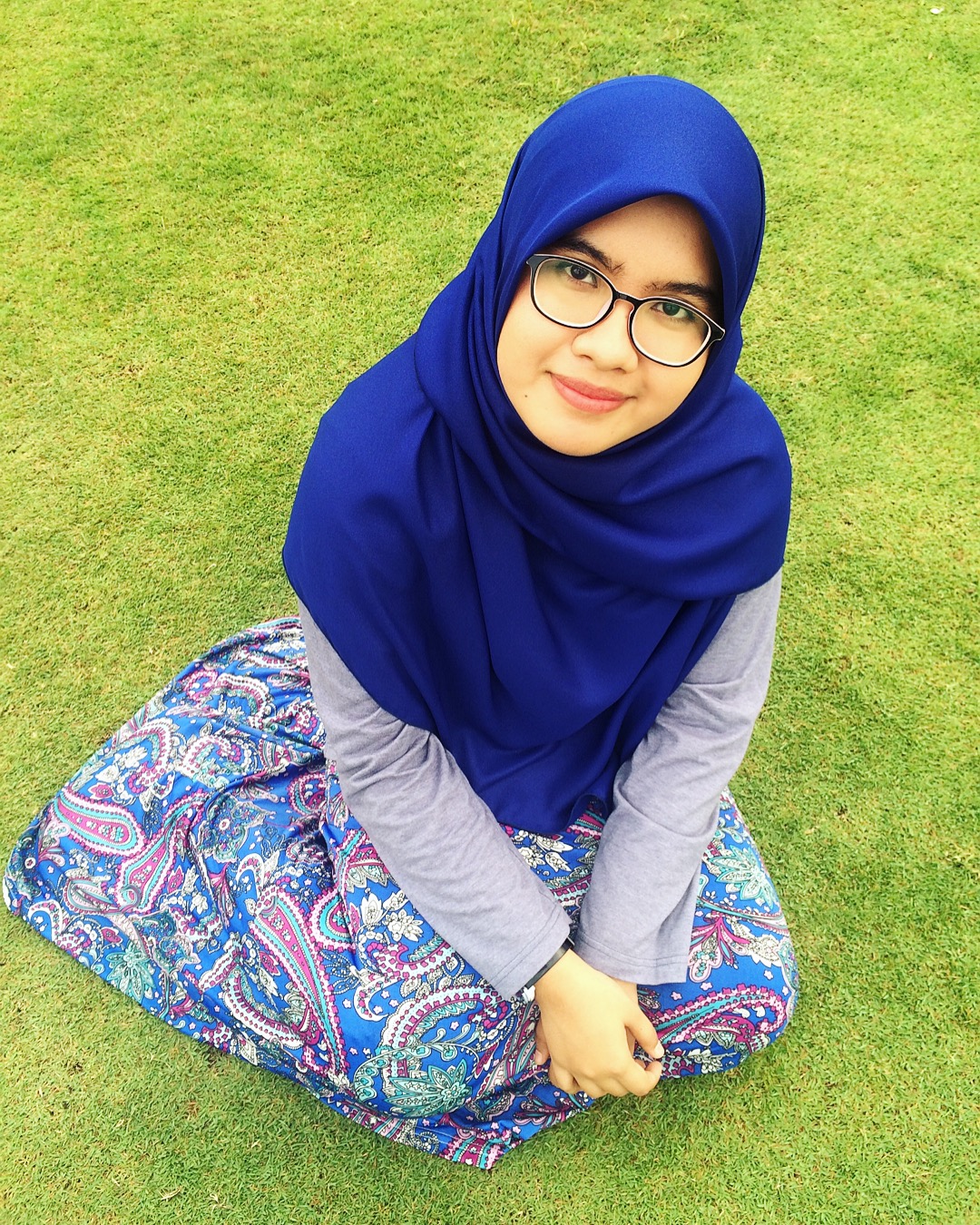 A postgraduate of Bachelor in Science (Hons) Biomolecular Science in UiTM Shah Alam.

My Tweets
nerdpotato
Create a free website or blog at WordPress.com.